I saw a really unusual tree yesterday. It was in the Hydrangea Garden (and part of our Specialty Collection) at the South Carolina Botanical Garden. On a short and felicitous tour, with a visiting former alum (and well-known horticulture expert) and a couple of Horticulture faculty, our Garden manager (James Arnold) showed us a Japanese Raisin Tree (Hovera dulcis) that he'd obtained from renowned SC plant collector (Bob McCartney of Woodlanders, Inc. in Aiken, SC). 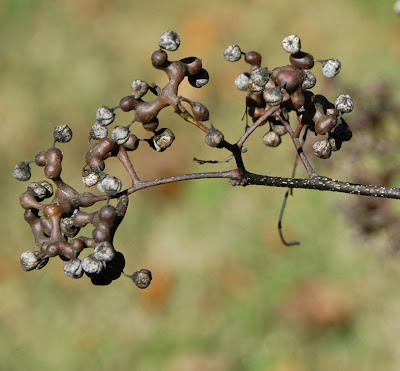 Maybe I'd seen this tree before, and didn't really notice it. James said that Bob had told him that it was edible. We gingerly tested it, and it WAS sweet, but what was remarkable to me was that what was edible wasn't the fruits, but a fleshy and succulent peduncle (the base of a flower and fruit).

In fall, the edible peduncles become sweet and dark, as the actual fruits have ripened and become dry and bear one or two seeds (they're the greyish capsules projecting from the fleshy peduncles).

I was curious about what animals might disperse the seeds in Hovera dulcis's natual habitat (that is, why would the peduncles be fleshy and sweet?)

I came across interesting references to Chinese ferrets, Asiatic bears, etc. dispersing seeds, but one of the most interesting hits was a study from Brazil about the food bodies that are produced as part of the fleshy peduncles.

These folks, studying it as a introduced species apparently, found that ants were taking the food bodies (both rich in lipids and sugars at different times in their development), and in return, protecting the plant from herbivores.

All of this is heady stuff for a plant ecologist; what a remarkable adaptation for a plant to have succulent and sweet peduncles as the reward for munching on the whole thing, and dispersing seeds in the process.
Email Post
Labels: Hovera dulcis Japanese Raisin Tree natural gardening SCBG