We have a lovely native wisteria, Wisteria americana, which is much more well-behaved than its Asian cousin.

Chinese Wisteria, although fragrant and lovely, is rampant and invasive, when not carefully confined on an arbor or fence.  It's a memory plant for me;  when my sister and I took piano lessons through our teens (she's now a music teacher and musician), we alternated being at the library, which was just down the street from a tremendous wisteria vine, filled with fragrance in the spring. 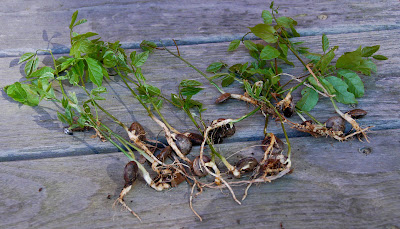 Wisteria sinesis, now, is a nemesis, something that we remove from strangling native trees and shrubs, and other plantings.

So I was quick to recognize and root out these wisteria seedlings--volunteers from some delivered mulch.

It may have been a single pod full of seeds, as they were all near each other!

Yikes, a vine that not only spreads through underground rhizomes, but also through seeds.  No wonder it's so 'successful'!
Email Post
Labels: Chinese wisteria invasive plants