As biologists and ecologists, we definitely know that ginkgo, even if a living fossil, doesn't support any current living wildlife species, at least not insects.

But we've had them now in three places:  the first was in the garden of the first house we owned, in Statesboro, GA, planted by the previous owner.  Our first Golden, Chessie, loved the leaves.  I had a photo that I loved of my gardening companion (Tim) and Chessie playing with them.  It was a pre-digital age, so I'm not sure if I still have that photo, but it's solidly in my memory of that place.

In Clemson, we planted Ginkgos from seed, collected on campus from the female Ginkgos near the P&A building.  I had a cubicle in the P&A building in my early years at the SC Botanical Garden, so I knew those trees.

We lived in Clemson for 22 years, I think, and our ginkgos were quite tall by the time we left, but hadn't produced any flowers, so their gender was still unknown.

In Asheville, we replaced an undistinguished red maple, planted by the previous owner, with a ginkgo male, selected for its golden fall color.  It hasn't disappointed, although it's been caught by freezes in spring and fall, damaging the short shoots in spring and affecting its fall color.

This year, the leaves are starting to turn yellow on the edges of interior leaves.  Elsewhere in town, some ginkgos have already turned yellow. A gardening friend in Toronto suggests too many nutrients may maintain green color;  she's undoubtedly right.  Our quirky ginkgo has benefited from plenty of compost and is remarkably bushy, thanks to its frost pruning a couple of years back.

A fading ginkgo leaf was my Inktober subject today.

I'm actually surprised, writing this on Places of the Spirit, that ginkgo popped up in the labels.  I just took a look at what I've posted before.

Oh, my.  This was a post from two years ago on November 7, with a beautiful image of our ginkgo turning yellow. 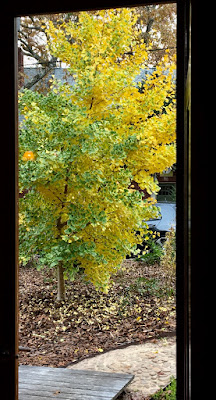