A month in Quebec 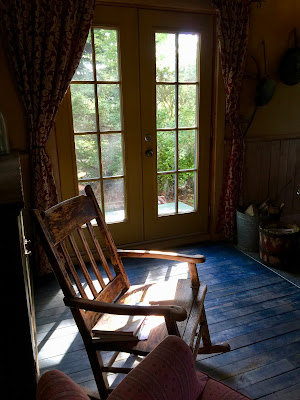 It’s been just over a month since we left North Carolina for Quebec, imagining what was to come with excitement and some trepidation. What if the house didn’t work out?  What if we didn’t like it? What if it’s not like we imagined?

Now a month in, I’m sitting in the small armchair in the living area, looking out at the Pic Champlain in Parc National du Bic as I write.  The view is framed by a lilac in flower at one edge.  And the light is marvelous.  I had been reading about Asian cooking in Milk Street Magazine, after a long morning in the garden, weeding, planting, and pruning.  As I was reading, I was suddenly struck again by the contrast of the light in this house with the light at home in North Carolina.

It's so different. In our house in North Carolina, the main floor, including the kitchen, is infused with light through the morning and afternoon, especially in the winter.  The light isn’t harsh, but bright and dappled, with a feeling of being surrounded by nature, with the canopy trees visible in the woodland garden through the windows.
One of the first things we did here in Quebec is open up the curtains more widely to let more light in.

The previous owner enjoyed the coziness of dim light; he had artistically draped the lovely old-fashioned curtains from their centers, halving the view through the upper windows.  Ditto for the curtains framing the French door, where the view looked out into giant overgrown shrubs.  Now, sitting in the armchair, I can look out to the small back porch and a more expansive view, including the lettuces and kale in the now cleaned-up and planted wooden trough. 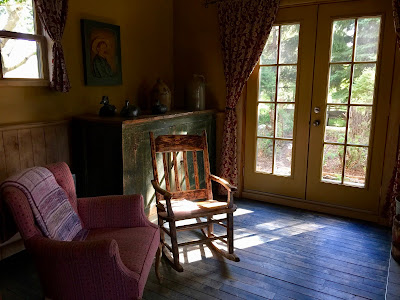 Similarly, although we both loved the lace half-curtain above the kitchen sink, in a dimly lit space, it blocked a bit of welcome extra light and part of the view outside.

For the same reason, we took down the graceful and delightful curtains in our upstairs bedroom.  The view looks over the east side of the garden;  it’s lovely in the morning after we pull the shade up (necessary because of the 4:30 am sunrise!)  It's nice in the afternoon, too.


As we open up the overgrown landscape, recreating views into woodland, we're doing the same thing.  By editing ungainly shrubs, so the outbuildings are more visible, we're gradually creating a more cohesive feel again of garden to house. There’s a balance between surrounding the house and outbuildings with garden and having the overgrown garden smother the context of the setting, which is singular, set between farms and the natural landscape of the national park across the highway.

And in an odd way, the hum of the road and the close presence of the train also reminds us that we’re on what the tourist authorities have designated the Route des Navigateurs, which follows the St. Lawrence River, focusing on the diversity and history of the river in their materials, including 19th century seaside resorts, fishing villages, and lighthouses.
Email Post
Labels: a house in Quebec Le Bic natural gardening Quebec