January 2012 was among the top ten warmest winters we've had in the contiguous United States, since weather data has been kept.  Not a surprise around here.

A blueberry in our kitchen garden next to the Discovery Center was in full flower this afternoon, and the ornamental cherries planted in the Highway 76 median going into Clemson, SC are (almost) in full flower. I don't know which species/cultivar they are, but they're probably more closely related to the Prunus mume (Japanese apricot) cultivars that have been flowering for over a month in the botanical garden (where I work).

Cooler temperatures are predicted for this weekend (geez, this is our winter story this year). 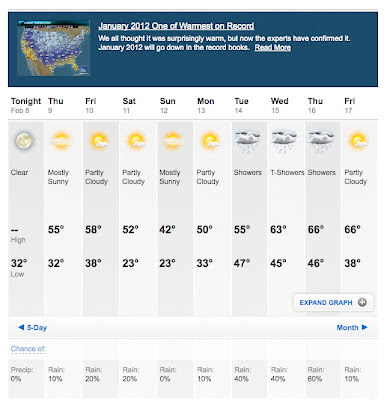 Light freezes tonight and tomorrow, a bit higher, then BLAST, down into the low 20°s, then back up to much higher temperatures.

Of course, warm spells in the South are nothing new, and we're experiencing the vagaries of the La Niña weather cycle, which suggests that we'll continue to have above average temperatures here in the Southeastern U.S., according to NOAA/National Weather Service predictions.
Email Post
Labels: A warm January a warm winter