Cabbages and their kin

Cabbage is a crop with many relatives. They include broccoli, kale, collard greens, cauliflower, brussel sprouts, broccoli rabe, and kohlrabi, in addition to other variations. Brassica oleracea, or Wild Mustard, has given rise to an impressive diversity of crop plants, illustrating the selective possibilities in a single species, to be sure.

A keen and experienced local (near where I garden) vegetable gardener (CEN) mentioned cabbages in a comment on a recent post. She mentioned a large cabbage with a pointed top, that was so large that it's chopped off in pieces for sale. 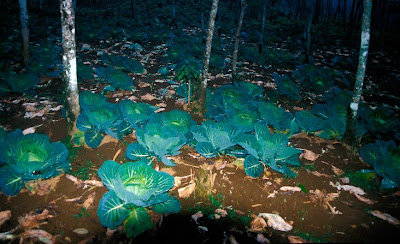 It got me thinking about cabbage variations, and the HUGE cabbages that we saw in northern Vietnam.

An early morning outside of Sapa found us poking around in nearby vegetable and flower gardens. There were the largest cabbages I'd ever seen growing in the understory of a forest canopy. This photo doesn't really reflect how LARGE the cabbages were, without a relative scale to compare. 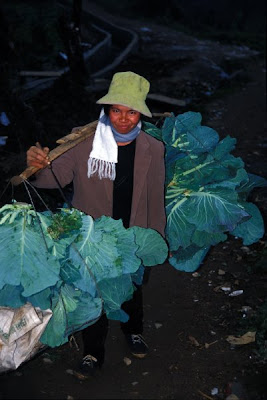 We were certainly off the tourist route, having taken a downward path from the main road, very early in the morning (the flash reflection on the photo shows that).

As we continued to walk down the valley, a young woman overtook us, loaded with giant cabbages for market.

The other crop here was roses, destined for flower markets in Hanoi, and maybe elsewhere. They were grown with protective paper cones around the buds. 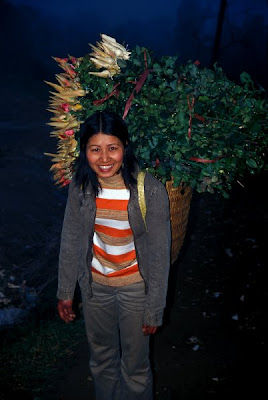