As we mark the time before we can return to Quebec, we've been eating out at our food-centric town's special restaurants (there are lots of them).  I've run across this green, also called saltwort, twice in the last two weeks.

It was new to me, a crunchy attractive addition to salads, with a light salty flavor.  Last night, I asked our server what it was - it started with an A, I thought I remembered, agretti?, but I simply googled Italian salty green and it popped up.

Apparently, agretti is wildly popular in Italy in season (it's an annual) and was originally used in making Venetian glass, as well as being eaten as a delicious edible. This article was informative.

It can be challenging to grow in cultivation as seed germination is tricky, but clearly some of our local vegetable growers have been successful with it.  Unfortunately, it seems also to have an adventive bent, colonizing saline edges in various places on the West coast of North American and perhaps elsewhere.

That reminds me of the delicious adventive "sea spinach" that we've harvested in Quebec along the St. Lawrence - that species was native to northern Europe.

Here's a photo of it being included in a pasta dish, thanks to https://honest-food.net/agretti/ 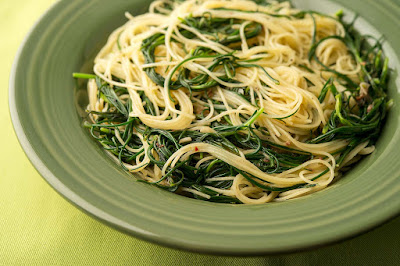