Hopefully ready for a significant freeze

I'm afraid this is going to be like the Easter freeze of some years back, where even native plants were zapped by the cold.  The tulip poplars have leafed out, the serviceberries and redbuds are in flower, as are the oaks.  We'll see.  Our quirky ginkgo has started to leaf out, too -- it's been sapped by late freezes, too, in the past, but always leafs out again.

I covered my hardy greens - kale, spinach, arugula, lettuce and emerging sugar snap peas -- with remay and greenhouse film this afternoon, thankfully with my gardening companion's help, as the winds were howling.

The predicted lows are about 24° F, quite low for this time of the year, even though our last "frosts" are still to come  ~ April 15, according to the revised USDA hardiness zones.

Of course the polar air doesn't pay attention to any of that. 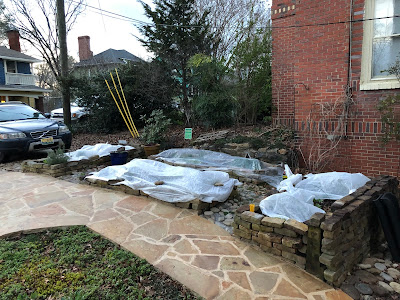 I hope that radiated heat from stone raised beds and the stone pathway, with covering will be enough.  But for two nights?  Sigh.

We have native early-blooming plants that will be affected, too, but perhaps not as much?  Celandine poppy (native to farther north), bloodroot and Eastern columbine about to flower- well, I'll see.